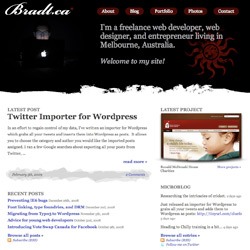 If you’ve been following me on Twitter, you may have noticed the changes I’ve been making to this site over the past few months.  A redesigned header, a new portfolio page, and this past weekend, I launched the new homepage.  It’s been just over a year since the last redesign.

Last year, I added a lot of WordPress plugins that retrieved my data from external services and displayed it on the homepage.  This year I went a step further.  I’d been thinking a lot about being in control of my data, so I decided to import all my Twitter data into WordPress.  For now, I’m calling it a microblog.  There’s lots to say about why I did this, but I will leave that for another post.

I also decided to import my bookmarks from Magnolia into WordPress as well (still TBD).  I wasn’t using any of Magnolia’s social bookmarking features and I found it dropped my session forcing me to login every time; a real pain.  I also found it was highly unreliable (which was confirmed today when I visited the site and found that all my data had been lost).  I considered going back to Delicious, but realized that when adding a bookmark I also tended to write a short blurb to accompany the link.  Thus, my bookmarks had really become microblog posts with a link in them.

Eventually, I plan to use WordPress’ Press This feature to post all microblog posts (including bookmarks).  Of course, I will be writing a plugin to replicate these microblog posts on Twitter as well.  I’m currently using Alex King‘s Twitter Tools to pull posts from Twitter into WordPress.  Unfortunately, the plugin wasn’t designed to push posts from WordPress to Twitter, so I will be writing another plugin to do just that.