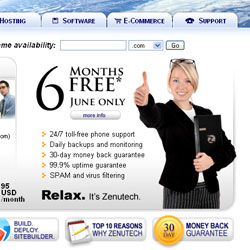 Summertime always results in a decrease in blogging activity for me just because I’d rather be outside. However, lately I’ve been swamped by work. I’ve been putting in a lot of extra hours at ActiveState to finish up the new e-commerce system and Pierre and I have been working hard to launch an ad campaign for Zenutech. I redesigned the content area of the Zenutech home page. It’s looking a bit sharper now and focuses more on our offerings that set us apart from other web hosts.

In addition to the ad campaign, we’re moving to a larger data center, upgrading all the plans (doubling the disk space and bandwidth in most cases), and offering some new services.

Addition of PHP5, FastCGI and Ruby on Rails
PHP4 will continue to be supported by our servers.
(ETA: August 1st, 2006 or earlier)

Addition of Windows Server 2003
Zenutech will add “Windows Web Hosting” to its list of services.
We will continue to focus on quality Unix/Linux web hosting.
(ETA: September 2006 or earlier)