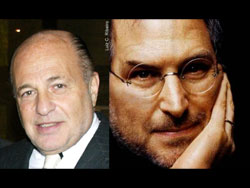 Matt’s post pointed me to this article about film studio execs failure to understand their industry.

I’ve previously expressed my frustration with the movie industry, their lack of understanding of what people want, and their unwillingness to make changes in their industry. This article strengthens that argument on another front. One of the best parts of the article translates what the execs have been saying to what they are actually saying:

They were having a similar discussion on CBC’s Q last week about the Universal Music / Apple iTunes debacle. During an interview, Boing Boing‘s Cory Doctorow had some fantastic points about the music labels, their “old men” executives, “7% boning” of the artists, and their reluctance to change with their industry. Check out the 15 minute interview in this podcast. Here’s a couple of my favorite quotes:

These businesses are being run by old men, who are hoping that they can outlast their industry so that they’ll retire shortly before the industry collapses.

…but the labels, in a classic example of sleazy book keeping shaft the artists…and tell the artists that this is a sale, so they are only owed a little less than 7 cents. So it’s not the traditional, “We’re boning you with a 7% royalty, it’s a brand new brave digital 7% boning with a royalty.

It seems to me that these studio execs (movie and music) still don’t understand the internet; they see it as a threat instead of an opportunity. They see reshaping their industry as a big risk. Digging in and making people (artists and consumers alike) bend to their will is what they have done, what has worked, and what is comfortable. But the industry has changed, is still changing, and what has worked isn’t going to work for much longer.