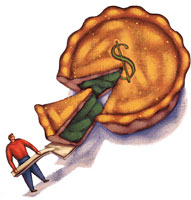 Basically, Markus said that Facebook’s only two options to improve their advertising situation is to better position ads or find advertisers willing to pay higher CPM rates. I would argue there’s a third option that the Facebook team is probably working on already: contextual advertising.

Currently, Facebook only has a simple user-targeted advertising program; you can order a “Flyer” that target’s the user’s demographics and associations. However, a Facebook Flyer does not take page content into account. It is not capable of showing a Starbucks ad because the user is reading a wall post with the word “coffee” in it. This level of relevance is powerful and Google Adsense is proof of this.

Imagine…a friend writes you a message about cycling this weekend and ads show up in the sidebar for the three closest bike shops to where you live. Remember, Facebook has your postal code if you filled it in.