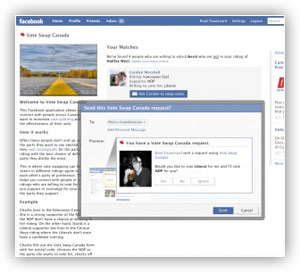 A few weeks ago there was quite a bit of buzz about vote swapping, mostly around the “Anti-Harper Vote Swap Canada” Facebook group.  Mat Savelli started the group and basically volunteered to manually match people up that emailed him their information.  I was truly inspired by this and contacted Mat about writting an application to take some of the manual pains out of the process.  He sent an encouraging reply and asked me to send him a link when it was ready.

This was my first Facebook app, so development was a bit slow.  When I started out, I was just going to build a simple form to capture the information and we could process the matches later.  But then I started thinking about how people should be choosing their own matches, connecting, and discussing before swapping votes.  And how everyone should be able to swap votes, not just those to the left of the political spectrum.  I decided that these issues were too important to ignore.  As a result, my project scope went from a simple form application to a much more complex application which was no longer aligned with Mat’s Facebook group.

All of a sudden there were a lot more scenarios to consider.  What if someone requests a vote swap but then wants to cancel?  Can you cancel a vote swap once it’s been confirmed by the other person?  What if someone removes the application from their Facebook profile?  What happens to their requests?  The list goes on.

In the end, I am pretty happy with the final product.  The basic flow is quite simple, you submit your vote swap information (riding, party you want to vote for, and parties you’re willing to vote for), review the people you’ve matched up with across the country and request to swap votes with any number of them.  They either accept, reject, or ignore your request.  Once someone accepts, you’re done.  Though you’re encouraged to open a dialog with them to be on the safe side.

Some of my friends have expressed their uncertainty about the effectiveness of vote swapping, but I believe it is a necessary counter measure to the shady practice of pre-election polling.  In a perfect world, the pollster would not exist and people would simply vote for who they wanted to win without consideration for any pre-election predictions.

The reality is that pre-election polling does exist and I believe it affects election results.  Basically, it tells voters which parties don’t have a shot at winning.  Not wanting to “waste” their vote, some voters will vote for one of the top parties in the pre-election polls.  Other voters will vote for the party who is predicted to have a shot at defeating the party they passionately dislike.  The reality is that the voters who are basing their vote on pre-election polling results are creating an imbalance in the outcome of the election (I am guilty myself).  For these voters, and these voters alone, I believe vote swapping can help balance out the imbalance that the pollsters have instilled in our democratic system.

Now, if we can only get all the voters that base their vote on pre-election polling to participate in vote swapping.  Yikes.