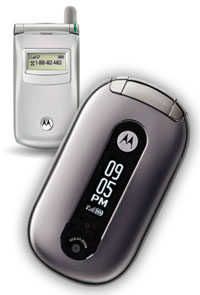 I am still using the first cell phone that I ever owned. Despite my reluctance to become “one of those people,” it was given to me in 2004 for business use. I have to say that there seems to be less of “those people” now that I am one of them, though the odd loud talker and jackass cell-talking motorist still gives me that violent urge.

But I digress, now that I’m completely dependent on my cell phone (I have no landline) and make use of it a lot, I am much more interested in it being pleasant to use. My Motorola T720 is built on Java so the UI is very slow and the phone book is clumsy. Other than that, the phone works fine. I have a digital camera and an MP3 player that takes pictures and plays music very well. I don’t need that crap in a cell phone. I want a phone that is really great at just being a phone. And apparently I’m not the only one. It seems that there is a good reason why manufacturers are having a hard time making a simple cell phone!

The more crap manufacturers add to cell phones, the more they become like clumsy handheld devices. I have a vision of the perfect handheld device. It would be the size of a deck of cards and the entire thing would be an LCD screen. There would be a touch pad (similar to a laptop) on the back that would allow you to control a mouse on the screen. I’ve read suggestions that a touchscreen would be great, but I don’t agree. Touchscreens have some difficult problems that have yet to be solved like preventing fingerprints/scratching. Also, it is much more difficult to design a user interface for hands and fingers of all sizes. Also, I would love to see a WiFi capable hand held but doubt we will for a long time. Handheld manufacturers will have a hard time pushing WiFi onto carriers who depend on charging customers for data transfers over their network.

I will probably end up getting a Motorola PEBL once it is available in Canada as the reviews seem to say that it is a good phone despite the clumsy keypad. Hopefully it will be an improvement over my current phone, but I have my doubts.