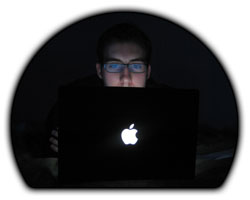 After considering it for about three years now, I’ve finally taken the leap from a PC to a Mac. Ever since Sean brought a Powerbook in to school in our third year at UNB I’ve been really impressed with what I’ve seen and heard. More recently I’ve been influenced by the fact that nearly everyone at ActiveState has a Mac (or two) and I noticed that tons of other web developers had Macs when I was at OSCON.

For me (and I believe most people) the attraction to go with a Mac is the software. OS X is based on Linux Unix, which is a good thing for developers. Like a playground really. As a result, the software available for OS X is pretty impressive. I’ve tried several times to convert to Linux on my PC because I love a lot of things about Linux, but always ended up back in Windows for Photoshop, Flash, and gaming. Since I don’t play video games anymore and Photoshop and Flash both support Mac, there was only a bit of doubt holding me back from getting a Mac.

I was somewhat concerned that I would really miss Windows. I had never really depended on another OS and had a few programs that I used every day that are Windows-only. Then JeffG reminded me that if I get desperate, I can always run Windows on the new Intel-based Macs with Bootcamp. That did it for me, there was absolutely no reason to delay getting a Mac. 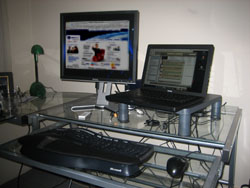 I ended up going with the black MacBook ($1649) from Apple Canada and have been really pleased with it. Unfortunately, I received it a couple of weeks ago, the same week Apple upgraded all their MacBooks keeping their prices the same. I felt like I got screwed over a bit, so I called Apple Canada, explained the situation, and they gave me a $340 credit! Needless to say, I’m a very happy customer.

It’s funny though, I’ve only had my MacBook for a few weeks now and I actually cringe using Windows at work on Monday morning after a weekend on OS X. I’m looking forward to immersing myself in development for Zenutech over Christmas vacation.

Update: As Bojan pointed out OS X is not Linux-based, it is based on FreeBSD which is a Unix-based OS. Thanks for the correction bud!