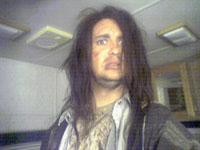 It’s Wil Wheaton! I was watching CSI on television tonight and a suspect for one of the cases struck me as familiar. Then I realized, hey that’s Wil Wheaton. Hilarious! I have read his blog in the past and decided verify my discovery by scurrying over to my computer. Sure enough, he had a post about an article the New York Times did about his work on the set of CSI.

In my opinion, he did a great job playing a drug addict bum suspected of murder. Yikes! Is that even a compliment? I guess it is only a compliment for actors who have proven themselves, which he definitely has.